On patience in hope yet hope realized

On patience in hope yet hope realized 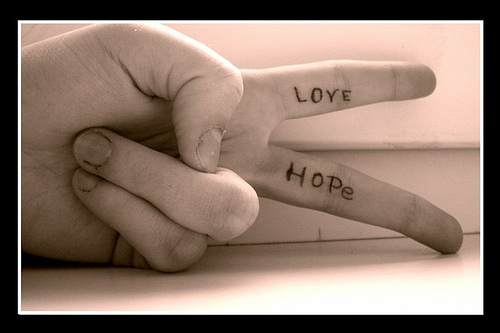 For  in this hope we were saved. Now hope that is seen is not hope. For who hopes for what he sees?  But if we hope for what we do not see, we  wait for it with patience. (ESV)

I love hope.  Ultimate hope is life eternal; but as I’ve written time and again, hope is for now, not just then.  The Kingdom is already AND not yet.  Maybe it should be phrased, “The Kingdom is not yet, but begun.”  This isn’t some post-millenial the world will redeem itself utopian idea, but the reality that God has begun to establish His Kingdom through dwelling in the hearts of His creation most like His own image.  I see this with Jesus’ prayer for the disciples (Mt. 6), and the upside-down use of leaven in Matthew 13:33.

But it takes patience.  That’s what this verse says.  In some ways it’s torture, but in others it is humbling, a cause for worship and thankfulness, and a lifelong reminder as to how God is in charge and not you.  For that I am grateful.

There’s been a handful of times like this in my life that I hoped for something and received it (whether material, situational, relational or professional).  I wish I could say that all of those times were when I was walking in the Spirit, but as we all do, I was serving self/flesh and I got what I deserved, as some would say.  God has often used it to develop me and ultimately work it for His good, but hope is tough to live with patience.

Sometimes the hope realized is on this side of Christ’s ultimate realization of hope, but the patience of hope maintains an understanding that it may not occur while on earth.  This reality is one in which I based one of the biggest decisions in my life.  Seeing hope from an eternal and already perspective was troubling to discern.  Do I maintain patience or do I realize this is the wrong this to hope for?  Often this is framed in the question of “Is this God’s will?”  Sometimes we simply have to walk through doors, not knowing if they will produce what we are hoping for or not.  Other times we know we need to be patient.  Frankly, this reality is brutal.  Painful. And at times Unassuring.

We want to know that what we hope for is what God wants us to hope for; and for matters that can be realized, when we hope for them, we want to SEE it.  So can we see hope?  Yes!  It can be realized.  Once we do see it, it is no longer hope, but hope realized.  This is to be celebrated and understood as a part of God’s working in our relationship with Him.  But even moreso is the patience.  The development of perseverance and patience is one of the most valuable characteristics we can receive.

Earlier in Romans, God uses Moses as an example.  Moses is promised to father many nations.  He hopes for it, yet in waiting his hope is only strengthened (how often do I [we] falter in such opportunities?)

In hope he believed against hope, that he should become the father of many nations, as he had been told,  “So shall your offspring be.”  He did not weaken in faith when he considered his own body, which was  as good as dead ( since he was about a hundred years old), or when he considered  the barrenness of Sarah’s womb.  No distrust made him waver concerning the promise of God, but he grew strong in his faith as he gave glory to God,  fully convinced that  God was able to do what he had promised (Romans 4:18-21, ESV).

How many men with vasectomies figure they can never have kids again because they did something they shouldn’t have?  Abraham shacked up with another woman to try and make the hope realized – and if you read carefully through Genesis 11-16 there isn’t much evidence of Abraham’s hope written.  Clearly he did trust God and was convinced that God would do this, but as you read Genesis, it wasn’t pretty.  Romans continues regarding this example of Abraham and his hope/faith:

In hope he believed against hope, that he should become the father of many nations, as he had been told,  “So shall your offspring be.”  He did not weaken in faith when he considered his own body, which was  as good as dead (since he was about a hundred years old), or when he considered  the barrenness of Sarah’s womb.  No distrust made him waver concerning the promise of God, but he grew strong in his faith as he gave glory to God,  fully convinced that  God was able to do what he had promised (v. 22-25).

It’s really quite funny where is said his body was “as good as dead.”  Yet is faith didn’t weaken and trust didn’t waver.  He gave glory to God, convinced that God would do what He said.  While we don’t always hope for what we know God wants in/through us, Abraham is a real example in numerous ways.  He tried (by the leading of Sarai) to father the nations on his own.  He only got older, making it more impossible.  He had people deny the promise he knew (Sarah), and yet he remained strong.  It wasn’t a picture-perfect example put in a nice flannel-board box.  But it was real.  It was hard.  It was to be admired and followed.

By no accident Paul continues in this theme of patience and hope among other traits in the next verses:

Therefore, since we have been justified by faith, we  have peace with God through our Lord Jesus Christ.  Through him we have also  obtained access by faith  into this grace  in which we stand, and  we  rejoice  in hope of the glory of God.  More than that, we  rejoice in our sufferings, knowing that suffering  produces endurance,  and endurance produces character, and character produces hope,  and  hope does not put us to shame, because God’s love  has been poured into our hearts through the Holy Spirit who has been given to us (5:1-5).

This is such a beautiful picture of the gospel!  Suffering.  Endurance (patience).  Character.  Hope!  The passage only continues to reveal God’s crazy, sacrificial, powerful love in the verses that follow.

For  while we were still weak, at the right time  Christ died for the ungodly.  For one will scarcely die for a righteous person—though perhaps for a good person one would dare even to die—  but  God shows his love for us in that  while we were still sinners, Christ died for us.  Since, therefore,  we have now been justified by his blood, much more shall we be saved by him from  the wrath of God.  For if  while we were enemies  we were reconciled to God by the death of his Son, much more, now that we are reconciled, shall we be saved by  his life.  More than that, we also rejoice in God through our Lord Jesus Christ, through whom we have now received  reconciliation (5:6-11)

While not an absolute because of flesh, sovereignty and Spirit:  Hope takes patience; it is also realized.