On Younger Brothers as Patriarchs

On Younger Brothers as Patriarchs 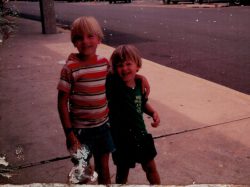 This post began in June of 2013. It has become all the more relevant as of late given the loss of my own younger brother. The non-italicized text is what I wrote four years ago. I hadn’t finished the blog because I wanted to add the verse addresses and not just presume readers would know the context the Scripture passage.

The fact is that the more I read in Scripture, the more I’m amazed by the impact of relationships. Certainly these can be between friends (disciples, Jonathan and David, Paul and Barnabas, etc.), but given my rich ties to family, I’m particularly amazed by younger brothers.

My parents were the youngest in their homes. The little brother and little sister. And I have a younger brother. I am a unique first-born middle child (figure that one out), and the person I’ve always felt a closer bond with than anyone other than my wife and kids has been my younger brother. It might sound weird, and probably is, but I have tried to live vicariously through him. This began in the realm of sport – and later gifts and talents – but I’ve always admired him and wanted him to be what I knew I could not.

So that’s the background. Enough about me. The Scripture is what’s paramount and speaks loudly to this.

Here’s a not-quite-exhaustive list of younger brothers who hold significance in Scripture (the list keeps growing rapidly as I hear sermons and read the text):

That was what I wrote in June of ’13; it’s absolutely crazy to me to think that I wrote this at the age Brian was–almost to the day!

You’ll note that bulleted list is a specific lineage; but I’m convinced younger brother favoritism runs throughout Scripture. (Maybe another post will delve into this in the other 65 books of Scripture!)

Cain, an older brother whose name meant “Gotten” in Hebrew (Gen. 4.1), wound up killing his younger brother Abel (Gen. 4.8). I need to do more study on the meaning of that phrase, “gotten,” but from a strictly English-speaking Bible insight, I wonder if the “gotten” has to do with selfishness and what we “get.” Cain was upset because of what his brother “got,” which wasn’t necessarily tangible, but something that was accepted. Cain longed for the approval his brother had. He wished he had “gotten” it, but instead he “took” from the one who had “gotten” what Cain wanted.

Isaac was raised by parents who are older than most 21st Century children’s great-great grandparents.  His parents eagerly awaited the promise of him–so much so that they decided to “outsource” child-bearing in their impatience (Gen. 16:4). Over a decade younger than his older brother (17:25), Isaac received the privilege of being his mom’s first and only son, and was treated as such. Much like parents treat the “surprise” child born a decade after their last “planned” child, Isaac was blessed as the favored child in the family. (Quick side note: he has one of the greatest beginnings of a love story in Genesis 24. It makes match.com look like just meeting someone randomly in a bar.)

Probably one of the worst names a Hebrew parent could have given a child was, “Jacob.” Most don’t know what this means in Hebrew, but it’s basically “liar/cheater/deceiver.” I know all children are one or all of these at some point in time, but I don’t think I would name my child this! In part, Jacob was given this name it was because he was born holding on to his brother’s heel, which served as an idiom much like “pulling your leg” does today. Jacob happened to live out his name, but more than just as a joker or class clown, he truly was a deceiver (who later himself was deceived – Gen. 29:23-26). He was the younger twin who came out of Rebekah just after the hairy, red Esau. Whereas Isaac thought highly of Esau’s hunting skills, Jacob was more of a mommy’s boy who would have watched The Food Network before ESPN or another stereotypical guy channel. Yet it is he who God chooses to extend his line.

As a result of Jacob being “Jacobed,” he winds up with two wives. His preferred, attractive wife Rachel winds up barren, but “the ugly one,” Leah, was so fertile that she got pregnant it seems just by walking near Mr. Deceiver. Leah’s first batch of four sons ends with Judah (29:35). Rachel and Leah exchange concubines for their own gain, and eventually Jacob winds up with 12 sons, the final two being Rachel’s. The first son of Jacob’s intended marriage was Joseph. His preferential treatment and later oppression also “Jacobed” his father, but became a source of salvation for Jacob’s family and the rest of the land. Interestingly enough, Judah is the one who talks his brothers out of killing Joseph (37:26). A younger, middle, and older brother, Judah’s sandwiched status might lead one to assume he is more forgotten than “gotten” (a la Cain), but it was through his line that God chose to incarnate Himself through His Son Jesus.

Judah, whose name’s meaning is significant for what his birth meant to Leah, “Praise the Lord,” did not exactly create the Lord’s line with the utmost of purity. He married a Canaanite named Shua (38:2), and they had three sons together. The first died because he was evil (v. 7), and the second, Onan, did not want to take his brother’s wife as his own, as was the custom. His disobedience also led to death (v. 10). The third son still needed to grow up before he was to take Tamar as his wife. However, Shua dies (v. 12), and Judah’s baby boy never does take Tamar (his first two sons’ wife, v. 14), so she remained at her father’s house (v. 11).

So where is this going? It gets weirder.

In an effort to have children, Tamar dresses as a prostitute and positions herself to “get” with Judah (I’m noticing a trend with this word “get). Presumably in his loneliness (?), Judah caves into her seduction and impregnates her (v. 14, 18). He had no idea it was his daughter in-law until she was about to be put to death and came forth with the “payment/pledge” Judah gave her amidst his fornication (v. 18-19; 25-26).  She “Jacobed” Jacob’s son!

Are we done yet? Nope, it gets even weirder still.

Tamar, we discover, is pregnant with twins! Here we go again … but this time, instead of the second child to enter into the world holding on to his brother’s foot, he reaches his hand out before his brother takes his first breath. The midwife, having tied a scarlet thread around the baby’s finger (28), discovers that it was the second child born who snuck his hand out first. That scarlet-finger boy, Zerah, breathed oxygen after his brother Perez (v. 29-30). What blows me away is the fact that these key figures get mentioned in reference to Jesus in the New Testament. The fourth born son of Jacob’s ugly wife and then the grandchildren he fathers share a place with Jesus in Matthew 1:2-3.

Younger brothers. In a culture of elder brothers getting first dibs, the first book of the Bible is threaded by this undertone of younger brothers who play a key part of the genealogy in which God saves the world.  Younger brothers are a gift. And I’m glad that God uses them in the ways in which he does.

I think I’ll chalk up my younger brother to one just like those God used throughout Genesis (and the rest of Scripture) to make His mark, despite the fact that he wasn’t crazy, immoral, or peculiar in a way like these mentioned.

I know God made his mark through Brian.

1 thought on “On Younger Brothers as Patriarchs”